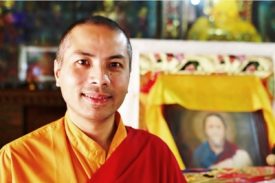 SD Manjughosh Bhantey is a fully ordained monk and an Assistant Master of the Dharma (Sahayak Dharmacharya). He is one of the Vidyadhara’s principal attendants and is responsible for disseminating Dharma teachings and guiding new and old students in their meditation practice. Bhantey is the first ‘Sahayak Samthacharya’ of the Byomakusuma Sangha. He was awarded the title of SS by the Vidyadhara in 2002. Later in February 2016 Bhantey was bestowed with the title ‘Sahayak Dharmacharya’.

Bhantey closely assists the Vidyadhara in his project to re-establish proper Buddhist view that once was accepted by seventy-five percent of the Indian Subcontinent for almost a thousand years and that gradually disappeared after the thirteenth century. Therefore, at the behest of the Vidyadhara, he has researched and learnt from various Hindu spiritual traditions to compare their teachings with the Vajrayana tradition and to discover if any tradition prevalent in the Indian Subcontinent today continues to propagate the Buddhist view and practices under a different name and lineage. In the course of this exploration, he has mastered Nada (inner sound), Prakash (inner light) and Atma (Self) in the secretive Avadhuti tradition of Shirdi Sai Baba, a very famous Indian saint and Bhante was fully authorized as a teacher of this tradition in 2010. However, he practices and teaches only Buddhism.

He is also a healer and is involved with the Sangha’s healing and wellbeing project. Specifically he is a Reiki master; he was awarded the Reiki Master certification in 2013. Additionally he learnt a special Buddhist healing method from a fully ordained monk of the Mahasi Sayadaw lineage in 1999. He gained full authorization to teach this and has actually taught this to Anagarika nuns in Kathmandu.