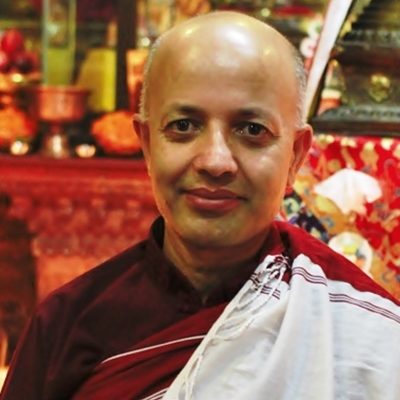 DD Narayan P. Rijal (Buddha Vajra) is a Senior Dharma Teacher. He was bestowed with the title ‘Dharmadhara’ (Holder of Dharma) by the Vidyadhara in February 2016.

DD Rijal is a Sanskrit scholar and was educated under the traditional Gurukul system. He has been practising under the guidance of the Vidyadhara since 1990 and is responsible for disseminating Dharma teachings and guiding students in their meditation practice.

He is also responsible for translating the Vidyadhara’s teachings from English into Nepali. Along with them he has also translated many classical Buddhist texts and prayers from Sanskrit into Nepali and English, including the Bodhicharyaavatara, Munimataprakash, and texts of numerous esoteric Buddhist deity practices. His most recent publications are Bouddhadarsha and Mahayanabouddhadarsha, texts on the classical ideals of Buddhism.

DD Rijal works as a Professor of Physics at the Tribhuvan University in Kathmandu, Nepal.